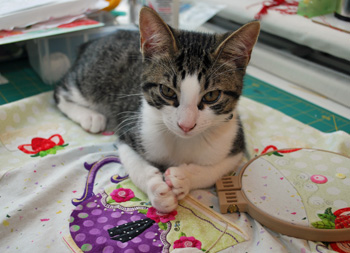 No sewing room (studio if you have to) is not complete without the companionship of our furry friends.  I now have three cats, two of which are rescue kittens (long story) and a pug named Daisy all of whom follow my every move and must be in my sewing room with me at all times.

They love my sewing room and everything in it.  In the above picture is my cutie Milo.  Although when this picture was snapped, I wouldn’t have exactly called him my “cutie”.  You see Milo thinks he is responsible for hunting down any spools of applique thread and toying with them until they fall off of my work desk down to the floor below.  He finds it incredibly non-stop entertaining and fascinating.  I find it absolutely annoying.

So when Milo is “so over” playing with the spool of the moment, he knocks it off below to Daisy who is licking her chops and waiting in anticipation of a new chew toy. Like Daisy doesn’t have enough chew toys already!  The two of them are quite a tag team.

This is what I found after noticing Daisy had been way too quiet: 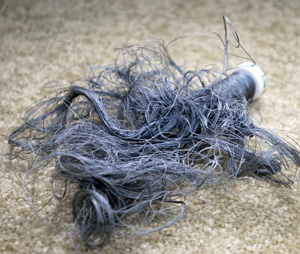 It was the EXACT color I needed and out of all of my threads this was the only one that matched.  I wasn’t happy! (oh was that an understatement)

Of course Daisy has the pitiful face routine all worked out and decided it would benefit her a great deal if she pulled that particular face out about now as she stands by the evidence.  I can also hear her saying, “but Milo did it!”. 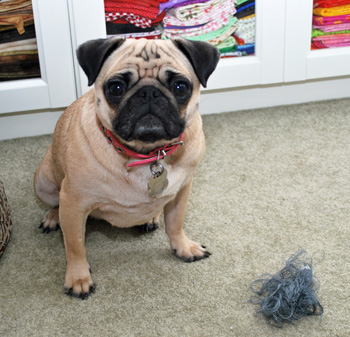 Do they stay or do they go?

I sometimes wonder if it is worth their company when they destroy a hard to find color and brand of essential applique thread.  Ok so they quickly redeem themselves.  I was able to salvage part of the spool in desperation, which is why they were able to keep their sewing room priviledges.

It definitely isn’t pretty to look at but it is usable, which is the purpose anyway. 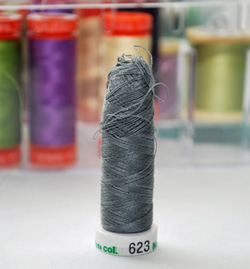 I am an Author, Designer, Illustrator and a major international award winning quilt artisan. I love working with fabrics and threads and they have become my medium of choice.

View all posts by Sandra →