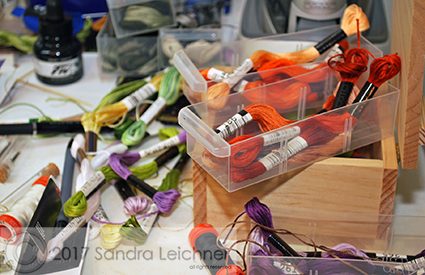 Happy New Year and I am glad to kick the backside of 2016 out the door.

As I had noted in the prior post, this block was not cooperative in the least. Why is it that the stuff you think will go smoothly and easily turns out to be the most problematic? I struggled, I REALLY struggled! In fact, there are areas of the background fabric that are held together only by a lonely strand of the weave.

However, I always find that the struggle creates the best work. I am forced to think, innovate, imagine, and push through the moments of “it can’t be done” to end up with my best work.

I know (boy do I know) that you have waited for this one and I hope it was worth it. 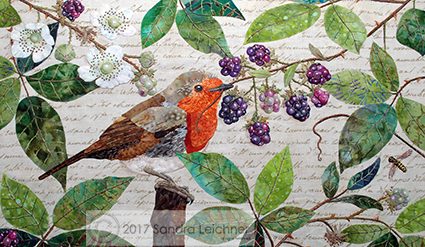 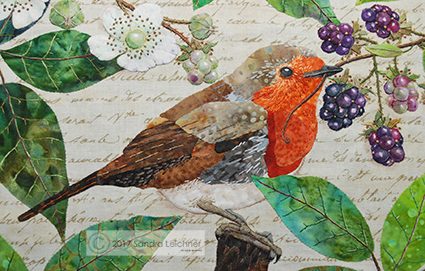 And his mate the Hover Fly: 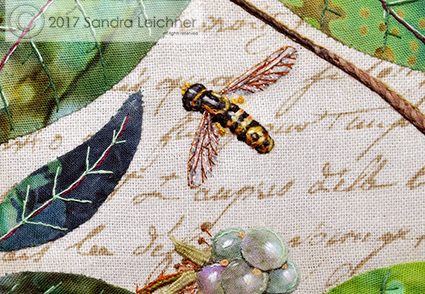 I forgot to add this yesterday–oops! Here is what the overall project looks like to date. If you have been following along, take a moment to line up your blocks and see how far you have come since the Wren. You should see visible improvement with each block. Smile and give yourself a pat on the back from me. 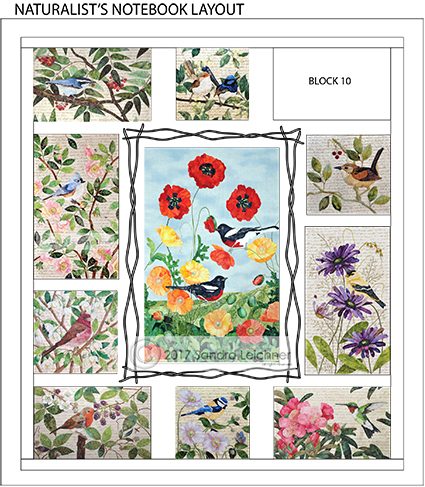 Remember the Flowers? I thought this “before and After” would be interesting to you. Notice how lining them really makes a difference?

Applique done but no embroidery: 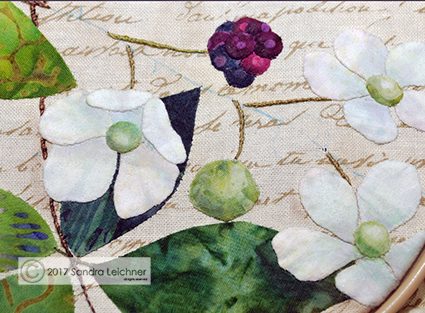 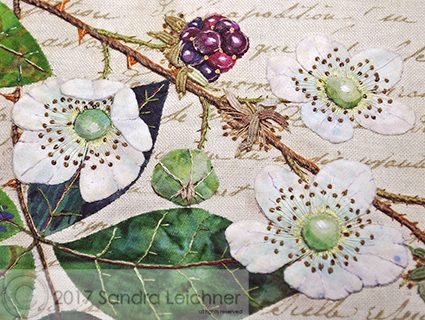 The Making of a Hover Fly

I was not going to include an insect  on this block but I had “Hover Fly” on the brain. Jason had done an illustration for me and I also did a quick sketch to familiarize myself with its structure and bits. 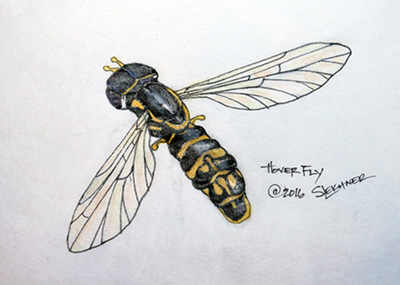 Once that was done, the hard part of translating it to thread and a working pattern. 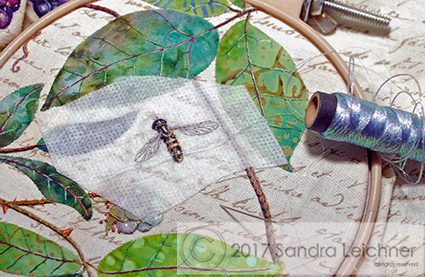 Now here is where I am really excited. Lecien-Cosmo have always been so supportive (Thank you Yumi and Katsumi). They send me all of their new lines. This year, just in time for Christmas, I received the new metallic line of “Soap Bubbles” (or “Shabon-dama” in Japanese). I can separate it into very fine *hairs* and this was just made for bugs among other many, many things. 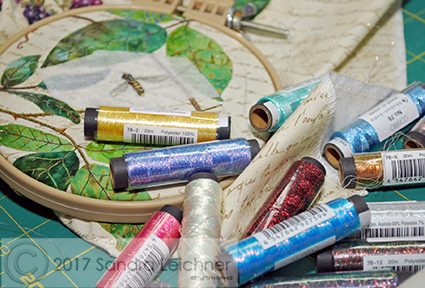 So I decided to try it out for the very tiny wings of the Hover Fly. The usual technique I use to create gossamer insect wings won’t work with this little guy.

I separated out three tiny strands: 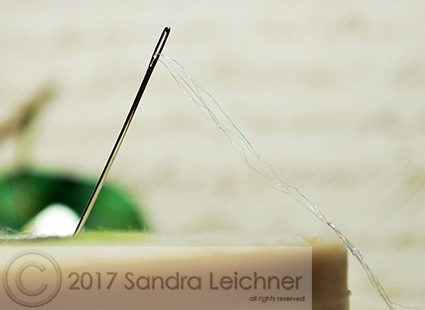 And then satin stitch (roughly) the tiny micro areas between the veins of the wings: 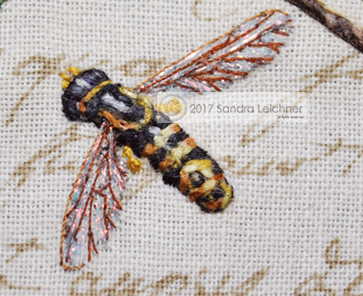 The veins are not actually as bold visually as in the picture and the shimmer from the new Cosmo thread looks so real and delicate! Jason said, “it looks like it just landed there and you could pick it up”.

I did have to adjust the pattern of the Hover Fly to exclude so much detail because it created an almost impossible task for me. Sometimes more detail works against a positive result and this was the case. I had to re-work a lot and I didn’t need to if I had altered the amount of detail for the scale appropriately.

This block combines a lot of the technical skills you have been conquering through repetition in the previous blocks. If you have done them, this will not be so daunting. If you have taken one of my workshops, then the embroidery used in this block should not create any sweat or angst.

I have to write up the instructions, cut kits, get everything to the printers and then package everything up. Then everything will be all will be ready for you!

From the “REALLY?” File: 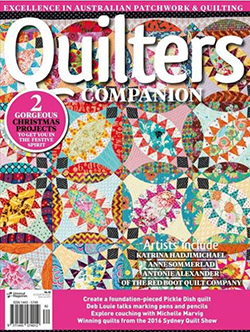 The latest issue of Quilter’s Companion (released in November) has a feature article on an ahem, “artist”. The artist/magazine inferred via photos that my block “Jason’s Grasshopper” was her work and her artistic creation with no mention of where that creative “idea” came from (she took my workshop). I can assure you, it is not her creative work and that, not only has she/magazine violated my copyright, but that of Jason’s as well and how he earns as an Autistic person.