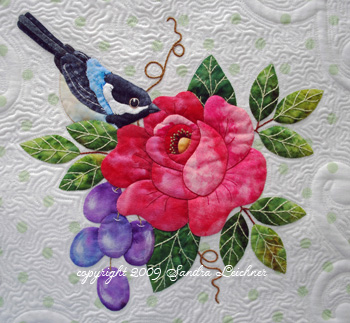 In my response to Boop yesterday I also revealed my other favorite thread to quilt with and that is the Highlights thread from Superior.  What I really love about this thread is the silky appearance the thread takes on against the surface of the fabric.   In my, never so humble opinion, I think it is just as pleasing as silk thread and I do like the 40 wt. texture.    For me it is also more forgiving of mistakes when quilting rather than highlighting every little slight oopsie of my hands while quilting.   I also like how, as in the above example, the thread melts into the background letting the fuller areas be the quilted focal point rather than the stitching lines.

Another nice advantage with this thread is notice how in the above example the thread reflects the light?  A subtle, but very pleasing effect that the thread does on its own without any help from me.  After much experimentation with other threads etc.,   I just can’t replicate this really cool effect.